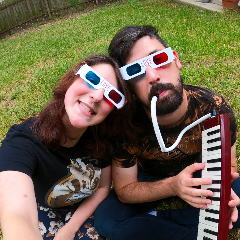 Sanderling is a piano-based, theatrical and emotional storm squirming to burst out of its indie pop-shaped box (which is a way more exciting way to say, just like, indie pop but louder) made up of singer Annie Nirschel and singer-pianist Russ Stone. The two met at an open mic in Brooklyn 100 years ago and played together in the band Union Street at some of the coolest New York venues like The Bitter End and Rockwood Music Hall. When the pandemic started, the two fled to Austin and formed Sanderling in Russ's parent's house. They often livestreamed on Instagram, released a single ("Marigolds"), and also got engaged, but that is less exciting. They're so excited to start playing again, and when they're not practicing, they're for sure making tacos and watching reality TV.