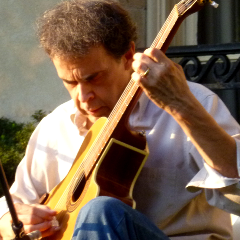 Guitarist Matt Richards often finds his music in categories other than jazz. In his solo acoustic performances he brings world and classical influences together with jazz to craft his own very unique musical identity. In addition, he explores the 'electric' side of jazz with his Power Trio Project and he draws upon a wealth of ideas beyond the guitar in his composing and production work. It may seem that Matt's elusive musical profile has distanced him from any sort of celebrity status -- in fact, he has earned an international following through performances, recordings and social media and gained unsolicited recognition from guitar legends Pierre Bensusan, Larry Coryell and Eric Johnson. The lockdown of 2020 enabled Matt to spend more time 'in the studio' to produce the upcoming album 'Power Trio Project', to record and produce new compositions and to work on new material for solo guitar. For 2021 and beyond Matt looks forward to live performances.